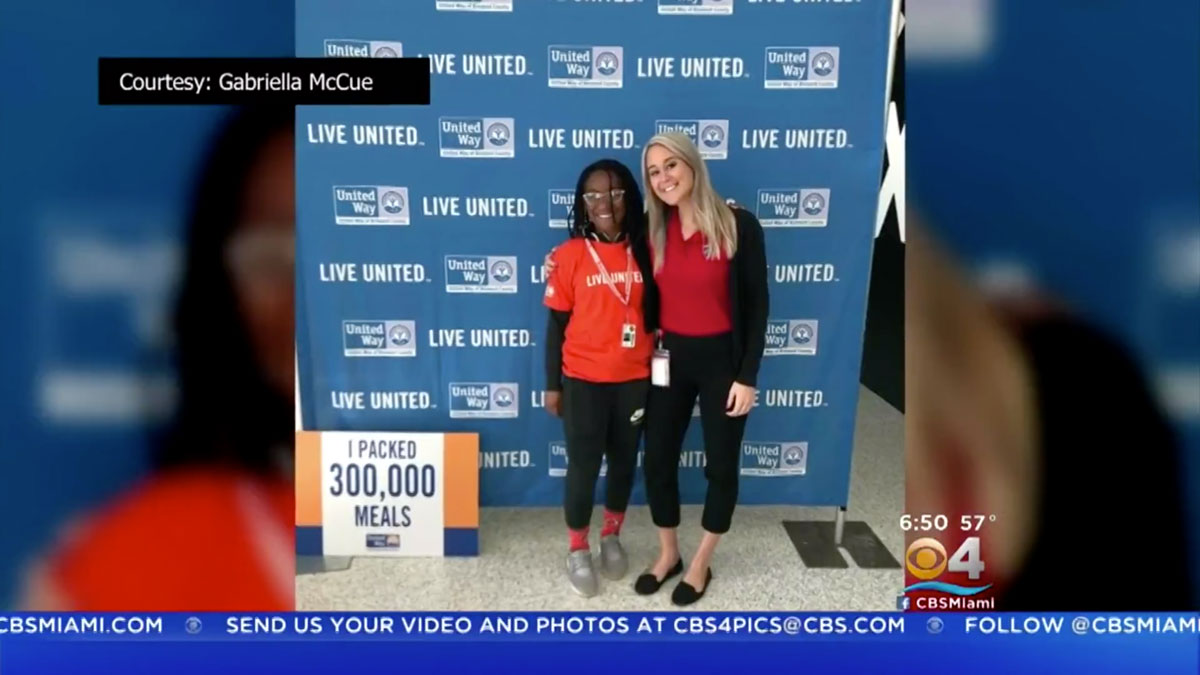 Gabby is a Big sister, a mentor paired with Aniyah two years ago for the “School to Work” program. An older sibling herself, Gabby knows the value of having someone to look up to and help guide you during your teenage years.

“I do have a younger sister and I was in a sorority and have a sorority little,” says Gabby. “So I just really liked the community aspect and being that older mentor for somebody. Being 17, 16 and in high school and not really having an idea of what you wanna do and be able to give them an opportunity to see the different careers.”

Aniyah is a junior at Piper High School. A bit shy, Gabby says her “Little” has come out of her shell since she started mentoring her.

“Public speaking is something she really wanted to work on,” Gabby says of Aniyah. “So using those tools and real-life work experience is super helpful.”

On their most recent time together, Aniyah learned the importance of giving back to the community, along with hundreds of other volunteers crowded into the BB&T Center in Sunrise.

“We’re helping make some care packages for those in need,” says a smiling Aniyah. “And that was an experience because that was the first time we got to actually, like put work in together and help others.”

Aniyah comes to the arena to work with Gabby once a month.

“She’s very nice, very sweet, very open. She’s funny,” Aniyah says of her ‘Big.’ “She works with the sponsorships for the Panthers and she puts up the ads on the marquees outside.”

“We’ve definitely built a strong relationship over the past few months,” Gabby says. “And I’m looking forward to see how far she’s come from the start of when I’ve known her to now. When I was in high school I had no idea activation was a career. So it’s really good exposure for the kids to see what’s what and what a career looks like in an arena.” She goes on, “High school’s a difficult age and can be a little difficult. And seeing that growth and seeing her be more comfortable and you know, ask more questions is great.”

Gabby is originally from Pennsylvania. She moved to South Florida to go college, earning a degree in sports marketing. That in and of itself highly impresses Aniyah.

“I’d like to know how she did that so simply and carefree,” Aniyah explains. “Just advice on how she was handling her future at such a young age and leave her hometown and broaden her horizons in a new place. Because for college I’m thinking of leaving Florida.”

One of Gabby’s biggest pieces of advice to her Little: Do not feel pressured to have it all figured out right now.

“She has so many things she’s interested in right now. She wants to go into acting. She likes sports. She really likes TV and the entertainment side of things,” Gabby says.

“I love entertainment. So hopefully I can guide my future into the entertainment industry, like working with movies,” says the teen, her eyes lighting up. “Writing scripts, directing, maybe actually being in a movie. She thinks it is pretty cool ’cause she knows my interest in movies. She’s very open about it and supportive.”

For now, Aniyah is working on being positive and taking each opportunity for growth that comes along, making the best of what she learns from her big sister.

“At home I am the big sister so I don’t even know what I look for. But Gabby’s sweet. I love her.”

“There are some things I wish I would’ve been told and I wish I had a mentor growing up and I never did. So I always enjoyed being that for somebody else. It’s really rewarding,” Gabby explains.